This device adds professional sound to your social media videos or live streaming, 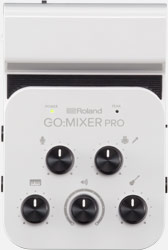 My name is Zain and I am incredibly happy to be a part of this awesome masterclass. I love music of all types especially hip-hop, r&b, techno, house and jazz.

13 Likes 13 Likes 2 Comments
Dawn John Philip  in  Be Creativity
DJP Media - Building Community Based Learning for Creatives
We're a learning platform that helps people express themselves through art and believes in changing the way we learn online.
How We Got Here
The best offerings from leading learning platforms are tutorials that you pay for, saying that the best we have to offer our current and next generation of creators are pre-made tutorials just doesn’t make sense to us. When the biggest takeaway from school and college isn’t our text books or supplies but the people and experiences then this too should be recreated online for meaningful and effective learning.

What We Do
In the age of information where knowledge is available to all, unfortunately meaningful learning isn’t, which is what we’re challenging by making learning accessible, affordable and meaningful. We’re built around community, anyone can access our courses, learn, interact with trainers and other members of the community.

There are also discussions where users can ask questions, share their work and get feedback from professionals. No barriers, no paywalls, no trial periods. Just learning.

When students are ready to learn more we have live masterclasses with our trainers that cover topics like music production, beat making and film making with more to come.

These are paid live online classes like we’re all used to but students have access to a private classroom on the platform they can view recordings of their classes, share projects and files or just talk about ideas and ask questions, just like a real classroom but it’s always open.

We’re learning, collaborating and building a platform that inspires us to learn and teach, not just a collection of “how to” videos.
Start learning here.
Checkout our Master Class here.
14 Likes 14 Likes 1 Comment
Nandhana Krishna  in  Be Creativity

Sir, apart from music production, would you provide any courses for singers, like vocal techniques and stuff and also any kind of training for performers?

What are the steps

Nikhil Bejai is a Producer and Educator based out of Bangalore. He’s a resident Trainer at DJP Media, and his music has been featured by the likes of Rolling Stones India, TheVibe and so on.

Growing up in Mangalore, his parents enrolled him in Tabla classes, so he could make use of his late grandfather’s tabla set. Thanks to the internet, he started exploring different styles of music ranging from pop to metal and would find himself trying to learn to mimic his favourite singers.

During his undergraduate years in Mysore, he formed a rock band with like minded musician friends. In order to help his band write new music, he taught himself the basics of music production. The band went on to play numerous shows in and around the city, even winning a few competitions.

After graduation, he got into a corporate job which he quit after a couple years as he was unable to connect with music. With some savings, he signed up for an Audio Engineering Program in Bangalore, where he learnt recording arts and production. His teacher Dawn Philip, who was heading the Music Production Department at the institute, offered him an internship at his production house ‘DJP Media’.

Here, he got the opportunity to work on numerous commercial productions for brands like Myntra, OlaCabs, Embassy Group and so on. Apart from this, he also worked on musical scores for some independent film projects.

Nikhil likes to explore different music styles. “Understanding the art of music making, allowed me to appreciate music in general, as tiny nuanced changes to the fabric of sound.” He also composes audiovisual pieces, which involves composing musical scores to sampled video footage of everyday life, often accenting the visual rhythms with music.

Nikhil has been teaching music production at DJP Media over the past few years.

With the new platform, he's put together a free course as well as a live masterclass on music making with Ableton Live. In this course, you will gain deep knowledge of using the software, through making music, and not the other way around. A wide range of topics like - composition, arrangement, sound design, editing, recording, mixing and effects processing will be covered in great detail in a well structured manner, complimented by practice exercises and feedback sessions.

“While the live masterclass will get into advanced concepts and intricacies, it’s totally okay if you’re new to all this. For this very reason, we have these - easy to grasp - beginner video lessons. They’re four in total, and you’ll know how easy it is to start making your music!” Also, if you already make music, we still recommend that you go through these videos to brush up on some basics, and make sure we’re all on the same page!

Regarding the community based platform, Nikhil feels it's a game changer for education in general. “Students get in touch regularly after finishing programs, to discuss concepts and doubts and they know they’ll get a reliable response, unlike the comment section of a random youtube video. The platform is a great way to make our discussions more inclusive.” Nikhil feels this is the ideal social media platform for producers and creators to help and inspire each other.

We’re super excited to have Nikhil as part of our community!

Just wanted to know some tips of technology used in music

Here's a look at some free max for live devices that you can try with Ableton.

Here's an easy way to use reverb to make some interesting transition swells on Ableton Live.